I hope you have an amazing day.
Happy Holidays!

Thanks to Neatorama for the heads up!

Ryne over at The Moon is a Dead World organized a blog-a-thon for the holiday month: The Gory Gifts of Christmas. He made up a gift packet to send to interested bloggers that included a holiday-themed horror movie - but the movie would be a surprise until you popped it into your DVD player. Along with said DVD he sent some goodies to help get you through the viewing.

It's a good thing, too. The movie I ended up with was Snow Shark - Ancient Snow Beast. Ryne says he didn't know which DVD would go to which blogger, but I feel like he must me angry at me. Why else would he send me this lump of coal to watch? Wait, no... Watching a lump of coal for 90 minutes would have been preferable. 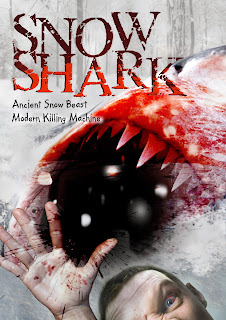 Summary of the, ahem, film: A scientist and two assistants are out in the woods, apparently trying to find out why animals are missing. Might have something to do with a meteor, they aren't sure. Before you know it, they have determined - from one animal corpse - that the creature that killed it must be the biggest discovery in science! But, they never get to tell anyone - the creature kills them all. Seems the meteor unleashed a long-dormant, prehistoric snow shark. Yep. A shark that travels through land and snow and kills humans.

From there, we jump ahead 12 years and find the shark just keeps on killing, in between badly acted, written and shot scenes of people bickering back and forth about said shark. We do get a hot tub nude scene with two topless ladies, but it is actually worse than the badly done shark scenes. Much, much worse. And that is saying something.

There is even a Quint-like character, a shark killing expert who knows better than everyone else. Except he comes off just as dumb and inept as every other character in the movie. Add to all this the fact that the film feels like it was written and shot by teenagers for a school project and I was wishing Ryne had included some booze in the care package.

So... what good can I say about this film? Hmm... Well, a positive spin might be that the filmmakers learned what to NEVER DO AGAIN, which in my opinion is to never, ever make another movie. It is also good that I didn't pay for this (sorry, Ryne). It is also wonderful that I never have to watch it again.

I am glad I took part in Ryne's blog-a-thon and would do it again, but I just wish I had gotten something better than this pile of reindeer crap. Ah well... At least I can warn everyone else on the planet to avoid this movie. If you think it will be fun in a Syfy Channel bad monster movie way, you are wrong. All this DVD is good for is to hang in your garden to scare away pests.

When the film ended, the best I could do was paraphrase Clark Griswold - "Hallelujah! Holy shit! Where's the Tylenol?"
Posted by Wings1295 at 2:00 AM No comments:

Once again, I am going to be featuring seldom heard
Christmas tunes for the month of December.

Fell in love with this one on January 2nd of this year,
so I made this post and scheduled it for today.
Hope the video is still available then, er, now!


Here's to an awesome December!