Okay, so this was everywhere yesterday:

Looks good to me. Keeps some of the scenes/aspects of the original while looking fresh and updated. Guess time shall tell!

(via everywhere, but I first caught it at The Captain's Ramblings)
Posted by Wings1295 at 12:05 AM 9 comments: 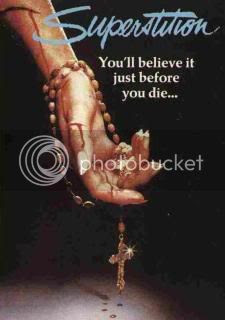 Plot: The Rev. David Thompson discovers that the inviting pond in the backyard of his new home was used to execute an evil witch three centuries ago -- and her spirit still lurks beneath the surface. Vowing to seek her revenge on anyone who ventures near her watery grave, the sorceress begins to hunt down her new neighbors in a bloody horror spree that turns Thompson's dream house into a violent nightmare.

I thought this might be a fun, creepy, 80s horror flick and I wanted to like it. But... it just was such a hodge-podge of bad acting, bad writing and miss opportunities that I couldn't enjoy it. Bleh. Plot: Four mathematicians who do not know each other are invited by a mysterious host on the pretext of resolving a great enigma. The room in which they find themselves turns out to be a shrinking room that will crush them if they do not discover in time what connects them all and why someone might wish to murder them.

This is a suspenseful thriller of a movie that kept me guessing until the end. Sort of a brainiac-thriller, since riddles or 'enigmas' are the keys used to stop the room from shrinking. But the interconnection between the main characters is much more puzzling than these problems, and may very well be their downfall.

Great movie, well acted and directed. It is a Spanish film, with English subtitles. I wonder how long it will be before someone decides it 'needs' to be remade with an American cast? Not needed, in my opinion. Although a spoof-version done with the cast of The Big Bang Theory might be fun!

Recommended for fans of tense thrillers, but you have to be open to reading subtitles and paying attention throughout.

This is a film I stumbled upon thanks to the great About.com: Horror Movies Airing on TV.

Once again to the podium...

The very cool Gilligan at the always awesome Retrospace chose little ole' me for an award: This is my second time being awarded this one, and I am just as thrilled. Thanks!

Okay, so I'm supposed to pass it along to ten more blogs.

The Vault of Horror

As usual, there are many more I could name. But, I will stick with the rules and just present these ten. Please check them out, I am sure you will enjoy them!
Posted by Wings1295 at 12:05 AM 10 comments:

The room filled with the bright light as it did every morning. Catherine stirred, not wanting to face yet another day here, in this room, in this place. Eventually, she threw back the white comforter and white sheets and swung her legs over the side of the bed.

Sitting slowly, she looked down at her white, lace nightgown. Not her choice, but nothing here was her choice. Sliding her feet into the white slippers on the floor, she stood and looked at the ivory clock on the painted white mantel over the fireplace. Early, as usual. But it didn’t matter. Time stood still here.

Slowly walking to the long window, framed with white linen curtains, she tried once more to see the outside world. Only a blinding whiteness lay beyond the glass. Daytime was complete white, nighttime endless black. Always the same, always the same.

She pulled the white curtains closed over the window as if to block out the white beyond and turned away. Her eyes slowly scanned the room, as she had done a thousand times before. An ornate and old bed, painted white and dressed in white. A chair, upholstered in white. A white table, with a white lamp. The mantel was white, a bookcase was white, the floor, the ceiling, the walls: all white, white, white.

Only four things in the room broke the endless emptiness the monochromatic color scheme offered. One were the words in the novels on the bookcase. While the books themselves where bound in white, with white pages, the words were black. She could read, at least.

Second, she still had her fair complexion and soft, chestnut hair. She would look at her hand sometimes for hours, savoring the break from utter whiteness and wondering how long it would be before she too faded away.

Third, while the fireplace featured a white painted wooden frame around whitewashed bricks, the flames were bright hues of orange, yellow and red. The colors were welcome, as was the heat, but they did nothing to alleviate the desolation and loneliness she felt. She was always cold.

Night brought the opposite of the white. Blackness filled every space until all she could see was the fire. The room would seem endless then, a void where nothing mattered. She had nightmares of disappearing into the darkness, of losing herself and never finding her way back.

But then morning would come again, and the brightness would replace the darkness. Again. Opposites, yet both left her feeling empty, alone, scared.

She walked away from the mantle and toward the full size antique mirror that stood in the corner of the room, the last thing to give color to her small world. The mirror itself was painted white, the frame ornate and intricately detailed, with strange, carved faces of what she had at first thought were cherubs. Over time, she had seen the demonic visages for what they really were. More gargoyles than cupids.

Gazing into the mirror, she didn’t see her reflection looking back. Instead, she saw him and the world beyond. She knew the man’s name was Rafael. She knew other things about him she wished she didn’t. She also knew he was in the real world, the world of color and life, and that she was trapped here, in this strange, drab copy. Her prison.

He sat dressed in a black suit, on the bed that mirrored the one here, but with maroon and gold linens. On the opposite side of the looking glass in the antique frame, Rafael watched her and smiled at her, his crooked, sad smile. Then he stood and walked away, to the door in his room that was the one thing missing in her room. She had no exit, no escape.

Catherine watched him go out the door and shut it behind him. As he did, the room she saw in the antique frame shimmered and vanished, the glass once more solid white. Crossing her arms over her chest, she turned away from the mirror. She was alone again. Nothing but the endless white, at least until the endless black replaced it.

I decided to use the first chapter of the novel I wrote back during the NaNoWriMo of 2008.

It's time to make the donuts! The Create Dunkin's Next Donut Contest is back.

Here is my creation: Click the above link to create your own donut & enter the contest.

The Bionic Woman - Angel of Mercy

Last week, thanks to Hulu, I featured the 2-part premier episode of "The Bionic Woman".

Plot: Jaime, disguised as a nurse, is assigned to fly into a civil war-torn South American country to rescue the American ambassador and his wife. Plot: A fraternity prank goes wrong and lands one student in a mental institution. Four years later, when his frat brothers host a costume party on a train to celebrate their graduation, the student sees this as his opportunity to exact revenge. He sneaks on the train and begins killing the partygoers one at a time, masking himself in the costumes of his victims. Will anyone make it off the train alive?

This is another early 80s slasher pic, one of the films that helped give Jamie Lee Curtis her Scream Queen title for years. Her role here as Alana is much less the shy, innocent than Laurie was in Halloween.

And it isn't a bad film, certainly gets points for originality. The mystery of who is actually doing the killing is pretty well done, even if the reveal is a little ... strange.

Johnson does great in his role as the "sole" adult amongst a train full of partying kids. And the claustrophobic setting is an interesting change from other run-of-the-mill movies.

Recommended for horror/slasher/Curtis fans. It is a film I have watched more than once, so that says a lot, to me at least. Others may not be as thrilled by it all.

The 2008 film Train was originally planned to be a remake of this movie, but the story changed and it became its own film. A real remake of this film is rumored to be in the works.

I don't know how long the show has been there or how I missed it debuting on the site, but Hulu now has the entire first season of The Bionic Woman!

No, it isn't that misguided remake from a few years ago, this is the genuine 70s classic starring the wonderful Lindsay Wagner. I was such a big fan of both The Six-Million Dollar Man and The Bionic Woman. Big part of my childhood.

And they even let you embed them!

Here are the first episodes, the two-part Welcome Home, Jaime:

How awesome is that???

What strikes me as surprising is the slow pace of the show. They really took time to set up Jaime's new life in Ojai, her recovery from multiple surgeries and the loss of parts of her memory, specifically in regards to Steve Austin, The Six-Million Dollar Man. Lee Majors even makes a couple of appearances on the show. 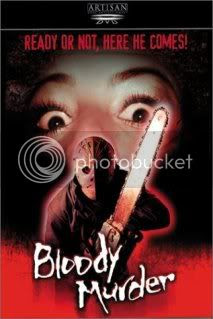 Plot: Trevor Moorehouse isn't screaming bloody murder -- he's committing it! A dozen counselors arrive at Camp Placid Pines and receive a warning from a wizened landscaper: There may be a crazy man in the woods. Of course, they pay no attention until they start disappearing one by one! Has the urban legend come to life to wreak havoc on their dwindling numbers?

Ugh. I think I have a winner for worst movie I have seen this year. This is CRAP! The acting is sub-par, on a level with ... Gah, I have nothing to compare it to. The kids on Mighty Morphin' Power Rangers were better.

The story is weak, a very pale take on the "killer at the lake" that doesn't even hold up. It is such a hodge-podge of stuff that the film feels like multiple people did segements and then they just put it together and hoped it would work. It doesn't.

All this could be forgiven... Well, most of it, had the movie been done in a tongue-in-cheek, "let's poke fun at Friday the 13th" style. But it is played straight. It is meant to be a serious, real slasher pic.

GAH! Just sucks. Sucks. SUCKS! Avoid, believe me. Unless you want to know what NOT to put in your horror movie, then by all means, use this as a "Do Not Do" template.