Anticipation is Half the Fun!

Time to step up and admit another Guilty Pleasure:

Okay, so this one may not be an "unknown" like The Pirate Movie, but lots of people seem to scoff at this show, and I can't see the reason why.

Basically, the show is made up of home video snippets sent in by viewers. We get to see the hilarious (and sometimes weird) moments caught on tape (or whatever) and laugh along with the subjects. Yeah, it's not highbrow stuff, but who says it needs to be? As they say, laughter is the best medicine.

Granted, sometimes the segments between clips, with the host making jokes, can be lame. But I believe this is true more of the earlier seasons with Bob Saget than now, with newer host Tom Bergeron.

Anyway, we all watch it for the slips and falls, cute kids and strange pets, right?

Enjoy some soccer-themed clips below:

Good stuff! AFV is something of which I will feel Guilty No More!
Posted by Wings1295 at 2:25 PM 9 comments:

First day of Summer here, so I am starting a new feature I hope you will all enjoy:

We all have things we like or even love that we may feel guilty about, for whatever reason. Maybe a book is considered 'trashy', a CD thought to be 'uncool', a television show 'mindless brain-candy', or even a movie of a 'D-level or less' status. We know the thing we like is considered of less-than-stellar quality, but it doesn't matter. Something about it appeals to us, keeps us entertained and brings us back for more. And that should be all that matters. To each their own, as we all should know by now.

So, I refuse to feel guilty any more. I like what I like. You can like it, too, or not - I don't care. I just am going to embrace them and bring them into the spotlight, where they belong.

Without further ado, here is something I enjoy and for which I will feel Guilty No More:

Figured I should start this feature of with what is considered a really guilty pleasure!

This film, starring Kristy McNichol and Christopher Atkins, is definitely not the greatest movie ever made, but for a kid in the 80s, it was something weird and wonderful to behold.

The movie got a lot of play on 80s cable channels like HBO, so my brother and I watched it over and over again. It was just wacky, weird and fun, never really taking itself too seriously. The characters constantly break the fourth wall and it's all in good fun.

The plot: The fantasy world of a shy, awkward girl named Mabel comes to life after she meets the handsome, dashing Frederic. In her fantasy, he must save her from pirates. But obligations to those same pirates interfere.  In the end, who will need saving?

The movie is a sort of reimagining of The Pirates of Penzance, but played loose and for laughs, with light pop 80s musical numbers throughout. Definitely of its time, however it is still a movie I can watch, laugh at and enjoy for the good humor and fun it was obviously made with. The actors all appear to be having a good time, and we can just relax and enjoy it, too.

This is one of the films that gave me a love for movies, television shows and even celebrities who don't take themselves overly seriously. Something great in watching something or someone that can laugh at itself, along with the audience.

So there you go, I am a fan of The Pirate Movie. And guilty no more!

Enjoy some quotes and then a musical number from the film:


Frederic: [moments after meeting for the first time] Look, I know this is going to sound silly, but I think I love you. I think I might even want to marry you.
Mabel: God, that was a short love scene!

Mabel: Frederic, you're not gay, are you?
Frederic: [high voice] No!
[clears throat and in a lower voice]
Frederic: No.
Mabel: The way you and the Pirate King get around in those rather feminine, pleated shirts and all that leather.
Frederic: Mabel!
Mabel: Hey! I'm not prejudiced. I mean, what does this country got a navy for? Screw 'em if they can't take a joke!
Frederic: You're weird.
Mabel: All kidding aside, tell me this. Are you a virgin?
Frederic: I don't know.
Mabel: Near enough.

Okay, so I thought the Toy Story 3 Toy Generator was a bit... odd.

Johnny over @ Freddy in Space posted a Splice Yourself Generator.

Here's how mine turned out: 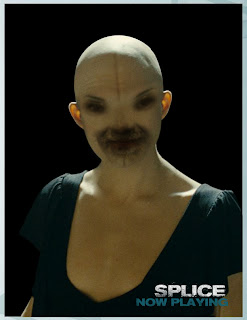 Now THAT is creepy!!!

Email ThisBlogThis!Share to TwitterShare to FacebookShare to Pinterest
Labels: freddy in space, generator, splice yourself

Disney/Pixar has a cool little generator:

A little creepy, if I do say so myself.