The Man with the Golden Helmet - FINALLY!

For years as a kid, my siblings and I were creeped out by a painting my parents had. We never received a real explanation as to who the man in the painting was or the artist who painted it.

He was just there, always watching.

Imagine our shock when we found an identical painting in my aunt's basement! We were convinced he was following us!

Here is the man who has lingered in memory for years: 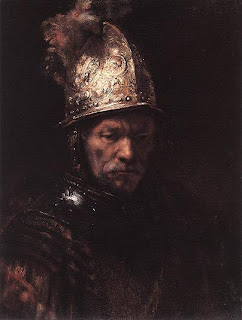 I had posted about this painting when I stumbled across it on the wall in a horror movie I watched called "Blood Freak". My interest was piqued anew, and I added a sidebar gadget to this blog asking for help with the painting's history. No one ever responded, however.

Yesterday, while messing with my blog layout, I decided to eliminate some stuff, that painting being one of them. I was talking with my buddy Jeff and he asked why I was curious about it. He started looking online, and I did again, as well.

At the same moment he sent me a link to the actual painting, I found it as well, by doing a less detailed search (old man in a helmet painting). After all these years, I had my answer.

The original painting is called "The Man with the Golden Helmet" and, up until recently, was believed to be a classic work by none other than Rembrandt. All those years of nightmares and refusals to walk by the "scary man" at night were thanks to Rembrandt!

Of course, now there is some debate as to whether it is by Rembrandt or not. I am not an art critic/follower/anything, so I have no clue. But it is cool to know the painting is considered a classic and was not, as I long believed, the product of some weird dude churning out creepy paintings in his basement!

I guess knock-offs were mass-produced in the 60s or 70s, and this would explain why my mother and her sister both had copies. Maybe they got them after filling a few of the old S&H Green Stamp booklets.

Thanks to Jeff for helping me solve this little puzzle of childhood.

Some links to read more about this painting:

Time.com - The Man with the Golden Helmet

Web Gallery of Art - The Man with the Golden Helmet