First off, hope you like the new layout for the blog. I liked the new editing features Blogspot offered and played around with them. I like, anyway.

Second, Drake @ Eclectic Banana awarded some of his favorite blogs/tumblrs the following:

I am very thankful for it, even if my creativity here has been lacking. And I am honored be among the great blogs he chose for to receive this. Thanks, Drake!

I am SUPPOSED to pick seven more blogs to honor, but many I like have already been awarded this one. So, I will award it to any of you reading this who have a creative blog of your own! Feel free to add it to your roster of awards.

Supposed to state seven facts about myself, but I have done that before and don't really have any 'new' facts to add. Although one thing that is new is our new puppy, TJ: 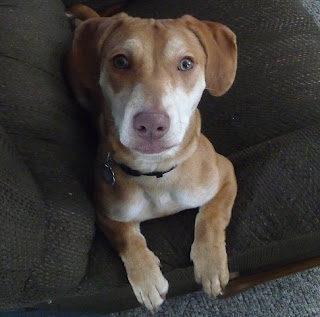 He is a shelter dog (originally called Pierre - didn't fit him), and we adopted him back in February. He is almost 7 months old and he has A LOT of energy.

TJ is probably one of the reasons for the lack of creative postings here, come to think of it! hahaha