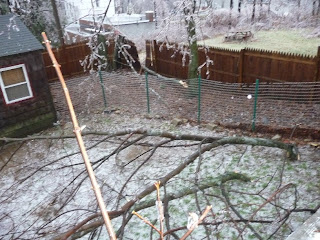 The ice storm - wow. What can I say? It was amazing and horrible at the same time. We went to bed Thursday night hearing the ice fall and thinking it was a normal, winter-y storm. We woke up to what I can only describe as our entire area broken.

We made out MUCH better than almost everyone we know. We haven't lost power, and our only damage is the far end of our wooden fence was split in two by the fallen top of a tree. We had a lot more branches and limbs down, large and small, but none caused any further damage, including the one that landed askew on our GLASS patio table. I am not kidding, it did not break. Wow.

The house next door to us lost power and has had a generator running. They have a huge, old tree in their large yard, and it lost a major chunk, which pushed on a pole and, I guess, knocked their power out. National Grid was outside for at least a full day, and yet I still hear the generator running this morning.

My brother-in-law lost power, as well, and had many, many trees down all over his yard. He finally got his power restored around 4:30 this morning. He said he has at least a day with the chainsaw in his yard alone.

Our 'niece' and her family also live in town, and have lost power, as well. They found a generator at Home Depot (luckily), but are still waiting for the lights to go back on.

Our good friends in Holden, which was one of the hardest hit areas, have a ton of issues. They are without power, had one tree uprooted, a basketball hoop smashed, a car rear windshield shattered and a flooded cellar. Luckily, a neighbor loaned them a generator to get their sump pump working, and their niece offered them shelter.

The amount of trees and downed power and phone lines is just amazing. As my other brother-in-law said, you thought people were exaggerating until you actually drove around a bit and saw for yourself. It looks more like a tornado blew through town than an ice storm. Trees and poles and wires, everywhere. Unreal.

School was cancelled on Friday and again for today. I know my daughter's school is being used as the shelter for our town, and I imagine that will continue until all power is restored. To give you an idea of what it looks like out there, my youngest son said he would have rather have had school than have it be like it is outside.

Estimates for power resortation vary. Some parts of town are nearly out-of-reach like my brother-in-law's, but he got power back this morning. So, I guess it all depends on what the repair people are able to do and when they are able to do it. Kudos to everyone who has been out there since Thursday night. The cold makes their job even worse, but they have been at it all this time, working to bring things back to normal. Smaller storms are due in the next couple of days, here's to hoping they don't make things worse.

Our best to everyone, take care & stay safe.

Local people sent in their own photos