Decided to get back to horror films with this week's theme, and one of the biggest 'whoops!' in horror movies has to be the incident at the heart of "The Fly".

The basic premise, if you don't know, is that a scientist has created a machine that can disintegrate something and reintegrate it in a different place, basically like the transporters from "Star Trek".

But the 'whoops' comes when he attempts to transport himself from one pod to the other. He steps in and closes the door, unaware that a tiny housefly has entered the pod with him.

Depending on the version of the story, the fly and himself appear at the other end with some parts mixed up, or the machine combines them both into one new man/fly entity.

The short story was originally written by George Langelaan, and was published in the June, 1957 issue of Playboy magazine. It was made into a movie in 1958, The Fly starring Vincent Price, Al Hedison, Patricia Owens and Herbert Marshall. Price didn't play the ill-fated scientist, but instead played the role of his brother, who must trick his sister-in-law into telling him the story of what happened. 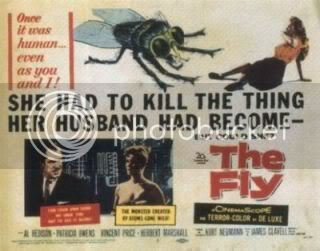 This film was followed by Return of the Fly (with Vincent Price reprising his role) in 1959 and Curse of the Fly in 1965.

In 1986, David Cronenberg did a remake of the movie, also calling it "The Fly". This film starred Jeff Goldblum, Geena Davis and John Getz. The improved effects of the time made for a more believable, albeit nasty looking, man/fly hybrid. This film was a success, and spawned a sequel as well, "The Fly II", in 1989, starring Eric Stoltz and Daphne Zuniga. 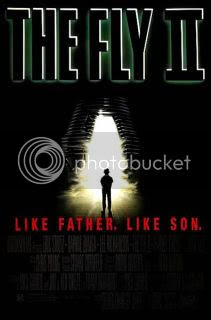 In 2008, Howard Shore's The Fly: The Opera premiered in Paris, France, loosely based on the 1986 David Cronenberg film. Interesting, to say the least.

Given Hollywood's current love of remakes, I am sure a new version of "The Fly" will be hitting theaters soon!

Here is the very cool trailer for the original 1958 film: