To tie that into Halloween Month, I am going to talk about some horror flicks that involve 'traffic' in some way. 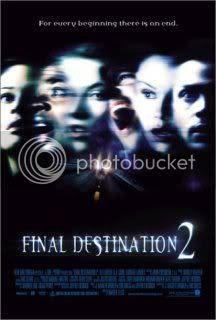 The first sequel to "Final Destination" again features a teen who has a premonition of a major disaster that kills many, including her and her friends. She is able to stop a few from dying, but once more, death will not give up so easily.

In the first film, a plane crash was the disaster. Here, a highway pile-up is the catalyst. And it is quite an incredible scene.

Below is the crash scene from the film.
WARNING: This is graphic and NOT for everyone.
You HAVE been warned.

Very well orchestrated, filmed and edited. Hard to watch, even though I have seen it a few times.

The rest of the film isn't horrible, but it isn't Academy Award level stuff, either. That said, it is a good enough film for what it is.

New York Magazine cited the highway pile-up scene as the greatest car crash in movie history, calling it "the new gold standard for car-related chaos in cinema". Director Quentin Tarantino has been quoted as saying that the opening scene was "a magnificent car action piece". And the highway pile up was nominated for "Best Action Sequence" at the 2003 MTV Movie Awards.

A few other traffic-related horror/thriller flicks: This is the great flick, directed by Steven Spielberg, in which Dennis Weaver portrays a businessman who runs afoul of a tractor-trailer driver, who then proceeds to chase him through the desert highways. An intense film, this one freaked me out as a kid.

Spielberg shot this film in 13 days, creating an amazing film in such a short amount of time! Another road flick that scared the crap out of me, this one is about a young guy who manages to elude a nutcase hitchhiker. But soon enough, the hitchhiker has framed the dude for his crimes and has made his life hell. And it gets worse! Rutger Hauer played one scary creep in this film, and I bet he put a lot of drivers off from picking up wayward travelers! 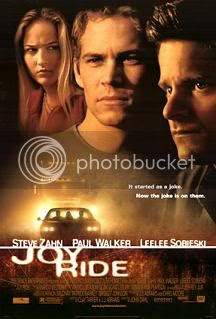 Three young people on a road trip from Colorado to New Jersey talk to a trucker on their CB radio, then must escape when he turns out to be a psychotic killer. Not bad for what it is, it takes a cue from "Duel", keeping the crazed killer nearly hidden for most of the flick.

Know of any others? Let me know in the comments!

This year has gone by FAST! Thank you to all who have commented here or inspired me with their own great blogs.