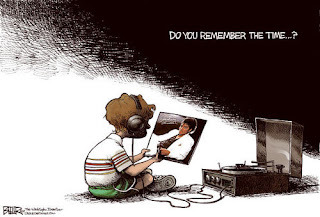 I debated doing a post on Michael Jackson's death, since it has been massively covered everywhere, to say the least.

But it has been on my mind, and when I started this blog I said it would be for me, mainly, to get the 'flotsam and jetsam out of my head'. So, this may get sappy, but now you've been warned.

I have been listening to his old music, watching old videos. Essentially, I guess I am dealing with the loss of the Michael Jackson from my childhood.

This quote from John Mayer in Time Magazine sums it up pretty well:

I was saying something similar to my wife. I think, for many of us, we are grieving the Michael Jackson that was lost to us about 15 or 16 years ago. And we hadn't been able to do that until he died, since, obviously, it wasn't possible to mourn a man who was still alive. He was still out there, with the ever-present cloud of doubt. And wondering what would come next.

It wasn't possible to say good-bye to someone who wasn't gone.

In listening, really listening, to his music, I have a deeper respect for the musician he was. Some truly great songs in his catalog. He was an artist.

And his videos remind me of the time from my childhood when videos were a big deal! Not only did they showcase his dancing skills, but they also were innovative for the time. Mini-movies, sometimes.

Ah well, I don't really know where I am going with all of this. Like I said, just trying to reconcile it all in my head. Pop culture has always been a part of my life, and in the 80s, when I was a teenager, music was a big part of it. Michael Jackson wasn't my favorite, but he was heard a lot thanks to my brother and a cousin who were big fans. And really, was there any celebrity bigger than MJ in the 80s?

It helps me understand the media hoopla now a little better. Even if the King of Pop being mourned has been gone for a long time, he was called the King of Pop for a reason.

I hope his legacy is more than suspicion and doubt and bad jokes (of which I am just as guilty of). I hope it is his music, his charity and, most of all, his children. I truly hope they have the amazing life he would surely have wanted for them.