My Take on The Impossible Truth Behind Snake Plissken's Eye Patch 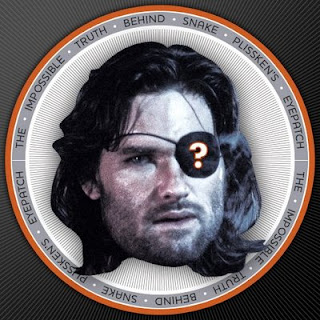 I was tagged by Calvin at Calvin's Canadian Cave of Cool for The Impossible Truth Behind Snake Plissken's Eyepatch meme. Here is my entry (meme rules below):

They were close now. Dammit. He thought slipping out of here would be easy. Nothing ever is.

Once he had realized the extent of the shit the god-damned government had been up to, all that crap with the Leningrad Ruse or whatever, he had to get the fuck out of here. He tried shutting down the computer he had accessed, but something wasn't right. There must have been a secret alarm. Now, they knew that he knew. He was done here.

He had made it as far as the emergency exit tunnel when he heard the grunts barreling down the metal stairs. Just a few hundred yards more and he'd be out and away from all this. Forever.

"HALT, PLISSKEN!" he heard behind him. A gun cocked.

Great, fucking Roberts, the ass. Of course he would be leading the group sent to grab him. Bastard.

Snake turned, smirking. "Hey, Roberts, what the hell, man? Can't a guy go for a smoke without an entourage?"

Roberts stopped, wary. He knew Snake too well. "Smoke my ass." he said, his weapon raised and aimed at his target, his former superior.

Snake's lip curled. Roberts was such an moron. His knife had flown down the hall and stabbed Roberts leg before the man knew Snake had thrown it.

"ARRGH!" he yelled, distracted, looking at the hilt of the weapon protruding from his thigh. It was embossed with a cobra. "Get him!" he hollered at his small band of soldiers.

Snake was already tearing off down the hall. He was so close. The last door was there. Then the bullets started tearing by. He stopped in the nearest doorway, flattening his body as best he could to avoid stray shots.

He had counted three men behind Roberts. Not bad odds. He pulled his small gun from it's holster and readied himself. A deep breath and he leapt from his hiding spot, firing as he dove.

He took down two of the men instantly, then slipped behind the unmanned security desk, even closer to the exit.

The third grunt dove into a doorway himself, his leader still down the hall, dealing with his leg.

"PLISSKEN!" Roberts called, half yelling, half screaming.
Snake knew the man had just yanked the knife out of his leg, he could hear the pain in his voice. Two-to-one. Still good odds.

He peered over the desk, his face obscured by the phone. He could see the grunt, barely visible in the doorway, waiting on word from Roberts to proceed. Further away, he could see Roberts advancing cautiously. As soon as the higher-ranked man motioned for the soldier to move, Snake took his shot. The man hadn't moved more than an inch when the bullet hit him in the gut. He collapsed just as quickly.

"DAMMIT!" Roberts yelled, firing at the desk. Papers flew around as bullets ricocheted off the surface. The phone exploded into a hundred pieces of metal and plastic.

While the man was busy murdering the furniture, Snake was crawling off down the hall towards the exit.

At the door, he had to access the security panel. Just then, a scream drew his attention behind. Roberts leapt upon him.

Snake's gun flew from his grasp as the two men struggled. Roberts was strong, but Snake had an advantage, sticking his fingers into the man's open wound. The scream was deafening. Snake pushed him off and away.

Up against the panel, he pressed "EXIT". The retinal identifier quickly scanned his eye and the door began to open. As he moved to leave, a hand grabbed his leg. The wounded Roberts wasn't giving up so easily and was up on his feet and struggling once more with Snake. He was still so damned strong. Snake was barely holding his own when a thought occurred to him.

He continued the struggle, keeping himself and his former colleague in the sliding door's path, his back to the wall and Roberts back to the jagged, locking teeth on the door itself. Keeping the man distracted was easy enough.

Soon, the door came sliding back. Roberts never had a chance to realize what was happening. The crunching, snapping, wet sounds were horrible. And the shocked look on his face even worse. But the man was big enough that the door stopped before crushing them both.

But something he hadn't considered had happened. Snake was trapped, pinned between the wall behind him and Roberts body stuck to the door in front of him. He couldn't wiggle himself loose no matter how he squirmed. In fact, the door closed a little more with each movement. The panel was close but he couldn't turn his head enough to engage the retinal identifier. Dammit.

Then he heard noises back down the hall. Back-up troops were coming. God-dammit.

He had only one option. Fishing in his pocket, he found his old army knife, the one thing he kept from his childhood. Without hesitation, he used the knife to cut out his left eye. His scream rivaled the one Roberts had let loose earlier.

Quickly bringing his eye to the panel, he hit "EXIT" and engaged the retinal scan. It worked, and the door proceeded to reverse direction. He felt the rush of air into his lungs and gasped. He hadn't realized he had stopped breathing.

As the door slid away, Roberts was pulled along with it.

Shots rang out. These new grunts were firing at him. The panel exploded in sparks and metal. The door began closing again as sirens blared. Snake slipped outside quickly.

Shoving his eye into a pocket, he ran off down the path, wanting as much distance between himself and this place and the god-dammed government as he could get. The pain from his impromptu surgery was only physical. The pain of the betrayal he felt was much deeper. Much worse. He ran.

Here are the rules:

1. Explain to the world The Impossible Truth Behind Snake Plissken's Eye-Patch. Could be a one word sentence (pussy) or could be a seven page novella (boring). Whatever you choose, but tell us all why Snake got the eye-patch.

2. Tag five bloggers asking them to create their own stories about the eye-patch.

3. Of course link back to Lazy Eye Theatre so that people know where this originated. And to those of you who got tagged by someone other than me, post your link in the comments section, I would love to read what you came up with.

Dr. Monkey Von Monkerstein at Monkey Muck
Jason at The Mad Ravings of an Entertainment Junkie
Curious George at TV and Celluloid
The Igloo Keeper at Igloo of the Uncanny
Johnny at Freddy in Space