This week's Theme Thursday theme - Mineral - proved a bit of a challenge. I mean, it's MINERAL for cripe's sake!

So, again I went with what I know and came up with: Why, you ask? Well, because it's about MINERS. See, miners mine minerals. (bite me)

Anyway, MY BLOODY VALENTINE is a Canadian horror/slasher film released in 1981. To quote (non-miner) Inigo Montoya: "Let me 'splain. No, there is too much. Let me sum up."

See, long ago some miners were trapped in an explosion when their bosses left early for the big Valentine's shindig. Harry Warden was the only survivor, but he did so by eating the other dead miners. He is eventually rescued, goes bonkers and is sent away. But a year later, he returns and wreaks horrible vengeance. He warns the town to knock off any further plans to celebrate.

Flash forward twenty years and the younger set in town says "Phooey!" and decide to have their own party. Yup, you guessed it: Mayhem and Murder ensues! Is Harry Warden, the Miner, back? Hmmm? Well, rent or buy the movie and see for yourself.

This movie is a great, creepy, 80s slasher classic. The miner always gave me the chills, and it helped that mineshafts in general are claustrophobic, dark and eerie. Who knows what lurks ahead?

Of course, the film was remade this year as MY BLOODY VALENTINE 3D. To quote (also-non-miner) Danny Noriega: "Some people weren't liking it!" 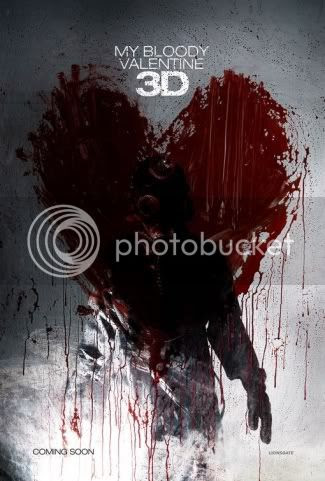 I did like it. Is it a great, Academy Award-winning example of the perfect horror film? Heck no. But then again, so very few are. What this movie IS is a fun, throw-back, slasher film that knows what the fans want to see. And it really delivers.

And the 3D, in my opinion (who else's opinion would it be, really?), is so great. It adds a feeling of almost "being there" to what you are watching. The opening hospital scene itself felt almost too real.

Here is some more mine-movie-goodness for ya:

TRAPPED ALIVE came out in 1993. I never saw this, but from what I read, two women and some escaped prisoners end up in a mine shaft where a cannibalistic man-thing is out to get 'em. Sounds... like MST3K would love it.

There is also a movie called CURSE OF THE FORTY-NINER, (aka MINER'S MASSACRE), from 2003. (Bet ya didn't think this would be a more than one shot sub-genre, did ya?) I didn't care for this movie. Like a drill at a mine, this was boring.

In non-horror films, INDIANA JONES AND THE TEMPLE OF DOOM saw our intrepid hero and cohorts having an adventure in a mine, even riding the coal cars as if they were in Six Flags.

And mining was the profession of choice for the little men in SNOW WHITE AND THE SEVEN DWARFS. Although this one can probably be called a horror flick, as the Evil Queen is trying to kill Snow White with poison hidden in an apple. Bitch.

And, in the new FRIDAY THE 13TH, Jason has a sort-of lair in some abandoned mine shafts under the Crystal Lake campgrounds. Plausible? I don't know. But I thought it could be a good explanation as to how Jason was able to appear anywhere around the camp in the older movies: He had secret tunnels. I wonder if the writers had this in mind? Maybe?

Like Indy in the coal cars, I went off track. Ah well...

Anyone remember any other miner/mine shaft horror flicks?
Posted by Wings1295 at 12:01 AM