This will make sense, trust me: 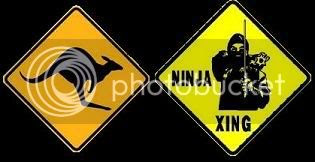 Okay, I know this is from earlier in the month, but I only just read about it, via Weird News from This is True.

Apparently, a kangaroo burst into a home in Australia in the middle of the night, freaking out the entire family. I find this hilarious.

I don't know which quote is the best:

"My initial thought when I was half awake was: it's a lunatic ninja coming through the window," said homeowner Beat Ettlin. "It seems about as likely as a kangaroo breaking in."

"There's a kangaroo in my room!" their 10-year-old boy yelled, finally identifying the beast.

"I think he's a hero," Verity said (about her underwear clad husband). "A hero in Bonds undies."

Here is another article: Hopping mad: Intruder kangaroo bursts into Aussie home, although all you have to do is Google "ninja kangaroo" to read tons of others.

A Google image search, however, turns up the following, best described as Kangaroo Erotica.