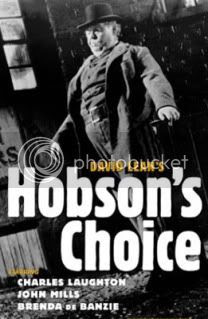 Plot: In this domestic comedy directed by David Lean, boozy widower Henry Hobson runs a successful boot shop in Victorian England. He dominates his employees and his three daughters, but when his eldest, Maggie, and his assistant, Willie, marry and set up a rival business, Hobson must change his autocratic ways. Hobson's Choice garnered several British Academy Award nominations, taking the prize for Best Film.

I DVR'd this film on the recommendation of Ivan from Thrilling Days of Yesteryear. I am so glad I did. It is a great movie, more than a 'just' a comedy.

The relationship between Maggie and Willie is what drew me in. It is all business at first, but their relationship grows and love develops as both of their characters develop. So well done, so well acted. Just a really wonderful movie.

Highly recommended, not just for fans of 'old movies', but for viewers looking for a great film.