Okay, so Megan was curious as to my thoughts on the LOST Finale, so here goes:

I liked it, a lot. To begin, I am not a believer in an afterlife, whether that's a purgatory or heaven or hell - just not what I believe.

But, I was a viewer here, not a writer, so I am okay with it all. And the fact that the Sideways world was a sort of purgatory or holding world for these people to gather together in, well, that was great, I thought.

As Jack's father said, they were all special to each other during the most important time of their lives. It echoed something Jacob said. When Sawyer denied all of the survivors being "alone" in the world, and therefore good candidates, Jacob corrected Sawyer. And he was right. Sawyer, Kate, Jack, Hurley - all of the Oceanic survivors were chosen because they had gotten lost in the world. And together, they found meaning and purpose - helping and loving one another. Like Jack said way back in the beginning: "If we can't learn to live together, we are going to die alone." They learned, and they died together.

As for all the little island secrets and such, I am no big stickler for EVERYTHING being spoon-fed to me. Some questions were answered, the big ones I believe, and some other things were left for us to continue to speculate on. Such as Walt, and what made him "special".

Since we weren't given an answer, I think maybe Walt was a back-up to Desmond. Desmond was the one who sat for years, pushing the button to avert the electro-magnetic kablooie. He was also slowly building up a sort of immunity to the island's electromagnetic properties that came in handy when he was needed to uncork the light from the cavern. Had something happened to Desmond before he was able to do that, maybe Walt would have had to show up and step up to do it.

But, in reality, I think we have to remember this IS a show. The actor who played Walt grew a lot. It could have been explained, since the survivors did jump around through time, that Walt had grown up, but in the end it didn't matter. Desmond did what he needed to do. Walt wasn't really needed, whatever his purpose. Not a big deal. And Walt wasn't in the church, since his time on the island was short, in comparison to the others. Maybe he never found himself "alone", and his afterlife was with the family or friends he made in life.

As for the church, I was at first a bit taken aback by how blatantly Christian it all seemed. But, in retrospect, the church was multi-denominational, and it also was the church where Eloise had her lab underground, where she showed Jack and Ben how to get back to the island and what they needed to do to find it. So, I am better with it now than I was upon first viewing.

One of my favorite parts of the entire finale was the little memory flashback/reunions the characters had.

Sun and Jin being reminded of their true lives upon the viewing of their daughter on the sonogram was great. Loved when Sawyer came in to check on them, Jin's expression at Sawyer being a cop was priceless!


Sayid and Shannon remembering each other once Sayid came to her rescue, right after Hurley said this: "I think you're a good guy, Sayid. I know a lot of people have told you that you're not... Maybe you've heard it so many times that you started believing it. But you can't let other people tell you what you are, dude. You have to decide for yourself."


Kate, Claire and Charlie all snapping back to themselves upon Aaron's SECOND birth. I think it was good that Kate got to remember bringing a life into the world, instead of the killing of her stepfather. Whether that was really baby Aaron or not, it doesn't matter. Claire and Charlie got to be a small family once again.

They were all great, but Sawyer and Juliet coming together at the candy machine I think that was my favorite of them all. They seemed so mismatched and ended up so perfect for each other, I was glad to see them get a final reunion. And the mysterious "It worked." or something that was supposedly words from Juliet after the bomb went off weren't anything more than the words she said when Sawyer unplugged the candy machine and the bar fell. Nice.

Locke didn't wind up with Helen, but I think we are remembering more of the Helen that wasn't real in the Sideways world than the Helen who Locke left behind when he went on the flight. By then, they weren't together. It makes sense that she would have moved on with her life.

And Jack, who took the longest to remember, finally makes peace with everything. His son in the Sideways world was, as other viewers and bloggers have written, his way of making peace with all the unresolved issues he had with his own father. Jack was never able to see the parental view of the situation between him and his father in life, because he had no kids of his own. But here, he was able to do that for a bit and come to terms with it all. And when he finally was reunited with his dad at the end, it was all okay.

Ben being his "Number Two" was great, as well. Keeps so true to that character and his road to redemption. And also leaves you wondering if maybe, just maybe, Ben has some ulterior motive. I think at the end we see that he didn't, that he was true to his word and was good at helping Hurley, but in the moment, I wondered if Ben was still scheming. I also like that he didn't go into the church, that he wasn't ready. Makes sense that maybe his group of important people involved others, like Rousseau and Alex, Whidmore and Eloise, Richard Alpert, maybe even Daniel and Charlotte and Ethan. And possibly even in the redemption of Michael, whose spirit we saw trapped on the island, due to his murder of Ana Lucia and Libby. Possibly they are all a future group waiting to go, and Ben will be the "Desmond" who helps them all remember and let go.

Others have pointed out lots of little details or question. Who made the statue? What about the hieroglyphics? Why was the light not stumbled upon before? The island, like the Earth itself and life itself, is not always going to give you all the answers. Some things happened before they landed on the island, and it is no one's responsibility to go around giving the new inhabitants all the answers to the past. People were there before the Oceanic crash, and people would be there after. Just life.

Like I said, some stuff not answered, but in a good way, because we get to speculate and talk about it, to think and let it work itself out in our own heads. The characters we cared about during the show got endings and resolutions and that is what should matter.

Good way to end a show like this, if you ask me. 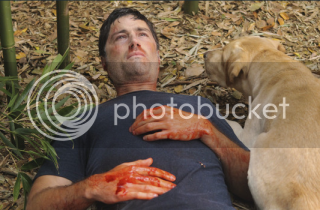