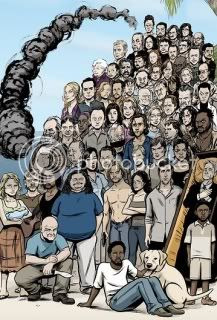 It all ends tonight. Not the debate or talk about the show, I think that will go on and on. But the show itself is all over tonight after a two-hour series retrospective/recap and a two-and-a-half hour finale. A lot of time for a show's finale, but this is no ordinary show.

I am looking forward to the finale, more so than some others I have seen as of late. Lost has always been so much bigger than just a show. It was a love it or hate show for most, and for some a love it-then hate it-then love it again show.

I loved it from the beginning, even if I kind of got lost in a sea of confusion somewhere in the middle. The announcement by the creators and ABC that the show had a definite end point was a great idea, and brought back some fans, I think, who were afraid it was going to devolve into a "how long can we stretch this" game. Knowing there was an end and, hopefully, a point to all this made it safe to step back in and finish up this wild ride.

And it paid off, for the show and for the viewers. I have been loving it again like I did back then. The episode a few weeks ago, that ended with Hurley, Kate, Sawyer and Jack stumbling to shore after the submarine sank, was pure Lost magic. It was sad, a major downer, but it also made you still feel like you were part of this little group of people just trying to, somehow, survive together. The faces and reactions of the characters as they realized all they had just lost was almost too much to take.

That has always been what has saved this show from becoming too over-the-top. These characters have been through so much, before and after their island crash, that we feel invested in them and care for what happens to them. We may not like them all, or agree with their decisions, but hey - that's life.

As I am sure every other fan has, I have my own theories on what is going on. But I am not worried that the creators are going to fail to explain every minute detail. I don't need them to. As long as we get some answer as to what is going on, with the island world and the sideways world, and what will become of these people once the final credits roll, I will be okay with it all.

The entire show is not made up of just the finale. Lost has to be viewed as whole, as a journey. Did the creators, writers, actors give us a show to watch and enjoy? Did we laugh, cry, shake our heads or gasp in shock? Hell yeah we did, many times. And that is all I can ask for in a television show. I don't need it to be perfect, and I don't think I would want it to be perfect. I want it to be enjoyable entertainment, and Lost has more than done that for me. Whatever the finale is or isn't, it is not the entire show.

The journey here has been made up of Jack. And Sawyer. And Kate, Hurley, Locke, Charlie, Claire, Aaron, Sayid, Sun, Jin, Michael, Walt, Rose, Bernard, Libby, Juliet, Ana Lucia, Mr. Eko, Shannon, Boone, Lapidus, Desmond, Penny, Daniel, Charlotte, Benjamin and the rest. Jacob and whatever his brother became may be the central good and evil of the show, but all these others we have met are the heart and soul. And while some will be missed more than others, they brought something to the magic that is this show. The polar bear in a tropical setting, the black smoke monster, the trippy trips through time - those are all great "what-the-hell" events. But the characters are what made it work.

While I don't think the creators, writers or actors will see this tiny post, I also want to say thank you, to all of them. It has been a roller-coaster of a ride for six years, and like any coaster, it has had its twists and turns, its ups and downs. It has been thrilling and scary, and I am glad I got on board.

So, I will watch it and enjoy it and probably scratch my head now and then. But I will be entertained and I expect nothing less, or more, from this show.

(The pic above is from National Post - view a clickable version with info on the characters!)
Posted by Wings1295 at 4:06 PM