On October 26th, NBC is airing the failed pilot for
The Munsters reboot, Mockingbird Lane.

I had high hopes for this show.
The person behind this reimagining, Bryan Fuller,
was the brains behind the awesome, yet short-lived, Pushing Daisies.
NBC reportedly put about $10 million into this production.

But once I saw some pictures, I was disappointed.
Sometimes, change just for the sake of change is not good.

However, the day after I wrote the above,
NBC released this trailer/promo for the one-shot special:

Well.
I think I would have liked seeing what this new take on
The Munsters would have been like.
Funny how 30 odd seconds can intrigue you!
Ah, well...

But, I love The Munsters,
so let's see what I can find to share with you here!

Did you know The Munsters theme song had lyrics?

When you are walking the street at night,And behind you there's no-one in view.But you hear mysterious feet at night,Then the Munsters are following you.If you should meet this strange family,Just forget what some people have said.The Munsters may shake your hand clammily,But they're not necessarily dead.Behind their house you mustn't be afraidTo see a figure digging with a spade,Perhaps someone didn't quite make the gradeWith the Munsters, with the Munsters.If when you're sleeping you dream a lot,Ghoulish nightmares parade thru your head.And then you wake up and scream a lotOh, the Munsters are under your bed.At midnight if creatures should prowl about,And if vampires and vultures swoop down,And werewolves and fiends shriek and howl about,Well, the Munsters are out on the town.One night I dared peek thru their window screen.My hair turned white at such a crazy sceneBecause every evening is Halloween,At the Munsters, at the Munsters.

Here's a Hollywood Backstage visit on the set of Munster, Go Home!,
the 1966 theatrical film based on the show.

In 1988, The Munsters were back,
with a new show in syndication:

I remember watching this show back then.
Wasn't as great as the original, but it was
fun, silly, brain candy.

I will end with this beautiful Munsters art,
by Arnold Kohn, for Whitman Publications: 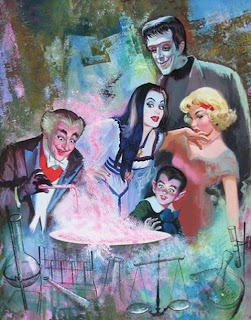 You can read more about this piece at
Frankensteinia, The Frankenstein Blog