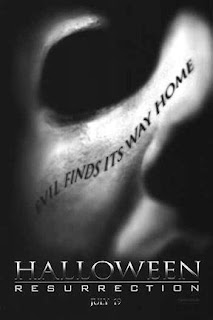 In 2002 we were "treated" to Halloween: Resurrection, the eight film in the Halloween series. It follows the events of 1998's Halloween H20: Twenty Years Later.

Summary: At the end of H20, Laurie beheads who she thinks is her brother, Michael Myers. In Resurrection, we learn that Michael had changed places with a paramedic, crushing the man's larynx so he couldn't speak. Laurie had killed an innocent man and she has been locked up in a psychiatric hospital for three years. On Halloween 2001, Michael finds her at last. But Laurie has been preparing for their showdown and has Michael trapped, hanging from the roof. But her reluctance to kill another man in a mask leads her to reach out to Michael. He grabs her and pulls her to him, stabbing her in the process. Laurie falls off the roof into the trees and to her (supposed) death.

Michael then heads back to Haddonfield and the old Myers family home, to apparently live in the basement. But the cast and crew of a reality show is also heading to the house, to film six young people as they attempt to spend Halloween night 2002 in the Myers' home. Michael is not happy to have intruders and the requisite murders occur.

By the end, only one student, Sara, and the head of the reality show, Freddie, survive and Michael is supposedly killed and taken to Haddonfield morgue. But as the movie ends, he opens his eyes, once again.

Okay... Let me first say that this is NOT my favorite Halloween film. There are a few scenes that are okay, but overall, I think this movie is just a sub-par entry in the series. Sadly, it ends up being the final film in this original series, as the next to follow from here is Rob Zombie's Halloween reboot/reimagining/whatever.

But, since the first time I saw this flick, I have had an idea of how much better it could have been if it had been edited differently. Now, I don't mean it would be a great film, by any means. But if it had played out like I think, it would have been at least a memorable send off for the original series and the characters.

Here's how I think it should have played (and remember, I am going with the storyline as we have it here, just edited in a different way.)

The film begins with Freddie and his DangerTainment reality show setting up at the Myers' home. Michael is in the basement, biding his time while he waits to find out the whereabouts of his sister, Laurie. The whole reality show part plays out as we see in the film, with Michael finally being "killed" and wheeled off to the morgue.

At the morgue, an orderly or nurse mentions that Laurie just happens to be a patient in the psychiatric wing of this very hospital and Michael opens his eyes at this news. A few more killings ensue as Michael makes his way to Laurie, who has been waiting for this confrontation, as we see in the beginning of the real film. Their battle occurs on the roof, with Michael grabbing Laurie and stabbing her and she falls.

Michael makes his way down to the grounds to see his sister's body, after all these years stalking her for this moment. But, when he arrives, all he finds is an impression in the lawn. Laurie is gone, off into the night, and the film ends with the "Halloween theme" playing as the camera shows the now deserted places from the movie - Laurie's hospital room, the morgue, the different rooms in the Myers' home - all empty and abandoned. The end.

Not only would it have played off better for the viewer, it would have given what turned out to be the final "original" film a tie-in to the first Halloween, with Laurie being the one off into the night, possibly finally free of Michael after all these years.

I know what you're thinking: Why put so much thought into an obviously badly written and ill-conceived sequel when the writers and producers themselves didn't put the thought into it? Well, what can I say? I love the Halloween films, love the characters of Michael Myers and Laurie Strode. I just wish it had ended with a better movie than the one we were given.

So, that's my thought. I have no "film editing" talents, so this will just have to remain how the movie should have played out in my head. But I do think it would have been a more satisfying conclusion to what was a great horror movie series.