My daughter and a bunch of her friends and schoolmates went on post-school trip to Six Flags New England today.

She had a great time, which was made even better when she met Aquaman!

pic is small due to cell phone

She has this to say about meeting the King of the Seas:

"Today, I met Aquaman. I was visiting Six Flags, and they had The Hall Of Justice, with Batman, Robin, The Green Lantern, and Aquaman inside. My friend Sarah and I visited the superheroes at least twenty times, and bugged the funions out of them. Aquaman and Batman gave us super-powers and super-names. Sarah could make dreams come true, (was) named Dream Catcher, and I was super fast, (and) named Synapse. Batman named us; he's a dork. Synapse are apparently fast things in your brain.

The superheroes signed my basketball, and Batman wrote on the part most difficult to see; Robin scolded him for that. Aquaman also signed my brand-new Aquaman t-shirt.

Aquaman had blonde slicked-back hair, the gold scaly chest, gold shoulder things, green gloves, an Aquaman belt, the green Spandex pants, and snazzy green boots. He welcomed our many returns, and told us Aqualad was at school in Atlantis. Sarah said it was summer, and he told us it's not summer in Atlantis. We then asked where Mera was, I forget what he said... I think he said she couldn't make it.

When I was telling him about my Aquabsessed (Aquaman obsessed) Dad, and I told him about the Aquaman signed comic page he has, he couldn't remember the name of his creator. It was funny =D!

Also, when we left for the last time, he held up his hand as though to wave (but didn't move his hand), so Sarah and I did the Live Long and Prosper sign, and he said, "What does that mean?" (he didn't know about the surface world, he told us), and we said, "It means 'Live Long and Prosper'!", and he said, "Is that a cultural thing?". I responded, "Yes. We are Vulcans." Aquaman was a very nice person, and Sarah and I enjoyed meeting him. =D "

This is the Aquaman "A" in the Hall of Justice:

Here is a pic of her looking very cute, with the shirt she bought and had signed by Aquaman:

Here is a close-up of the very cool t-shirt: 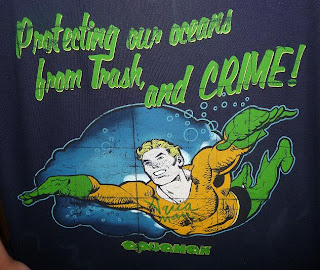 And a close up of the basketball she had signed by Aquaman, Green Lantern, Batman and Robin: 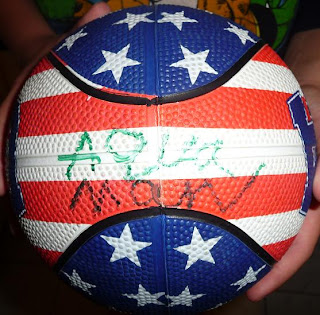 Very cool! Glad she had a great time!