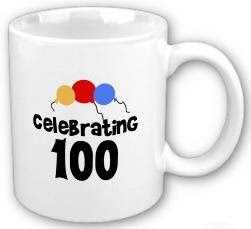 Can't believe I have done a hundred of these posts. Time flies. Funny, too, that it coincides with something I have been thinking about for awhile, but was unsure how to put into words.

Recently I read a review that went into all the things that have been "wrong" with different aspects of the various Star Trek shows. One of them stuck with me and still annoys me.

The writer said that one of the problems with Star Trek: The Next Generation was that the main characters all "got along" and that was just too unrealistic for him. I thought that sounded so depressingly pessimistic! Why can't a bunch of highly intelligent and well disciplined people (as a Starship crew would be) all work at getting along and being friends? Is it that far-fetched of an idea?

This then got me thinking about the way we live now, or at least the way we seem to expect things to be. Is it wrong to want to live in a positive world, where optimism and good will are the rule rather than the exception?

It reminds me of this scene, from Knots Landing (jump to 9m 44s), after Gary dismisses Karen as a "Pollyanna":

I have to agree with a lot of what is said by Karen here: Why is it passé or naive to want the world to be a rose-colored place? Why is her positive outlook the one sneered at as silly?

Will Ferrell is a hit-or-miss comedian, but the character he played in Elf is a great one. Buddy is without sarcasm or pessimism, totally happy with the world and wanting it to be a good place filled with good people. Yeah, he grew up in the North Pole with happy little elves, but it is when he interacts with people in the "real world" that you see how out of place he is. And all he is doing is being positive, happy and upbeat. Why is he the one so out of touch?

Another example would be Phoebe on Friends. She is usually just taken as the daffy, flighty, air-head, but if you watch the character develop, she is wonderfully interesting. How many sitcom characters have a past that involves a dead-beat dad, a mom who killed herself, and a life living on the streets? Yet Phoebe is hardly ever morose and dark. She is upbeat, loving the world and her time in it. And yet again, she isn't the norm, but rather the "odd one".

I know - I am being naive. The world is too complex, filled with too many different people and cultures wanting, needing and doing different things. And it isn't bound to change any time soon.

I guess the only way to help change things for the better is to just be one of the positive, upbeat, optimistic people, no matter how "cool" it is to be dark and pessimistic.