The theme chosen this week at Theme Thursday was "Swing".

Tough theme, I kept drawing a blank. Here is what I came up with:

I never played Little League as a kid, but my youngest son is playing on AAA for the first time this Spring. His team has been doing great, and the kids (and their parents) are having a fun time. He usually has the position of catcher, which he has improved at so much over the season. But one of the things he has been working hard on is batting. He had gone quite a few games without a hit and it was bugging him. Everyone had advice and tips for him, and he was trying it all.

A couple of games ago, he got his first hit, a bunt. Very cool! And tonight, he had another bunt and then got a great hit, a grounder that cracked off the bat. The throw to first was fast, and he was out, but it was an awesome hit!

A major league baseball player having issues with the swing of the bat is David Ortiz, the Red Sox DH (Designated Hitter). He has been having a really tough year, with his stats down all over the place. 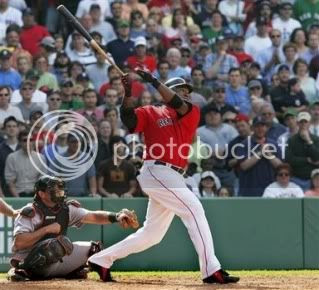 But the faith us Red Sox fans have for our Big Papi hasn't shaken. We are pulling for him each and every game. Last night, he had a great home run against the Yankees, and I don't know who was more thrilled - Ortiz or the fans!

You can do it, Big Papi!

Next is this amusement park ride, called the 'Alpine Swing': I haven't gone on one of these since I was a little kid, but my younger kids and our 'nephew' have gone on it quite a number of times. I can only imagine the feeling of freedom they feel is mixed with a little bit of nausea!

Last is one of my favorite places to sit, when the weather permits it: This is a stock photo, but the same model we have.

This is the swing we have on our deck, overlooking our backyard. I love just sitting and swinging with my wife, watching the kids play or swim in the pool, tossing rocks for our dog to search for, and sometimes just enjoying the day, a cool breeze, and peace and quiet.

We also love that the two side tables are ATTACHED to the whole frame. We had little tables with our previous swing, but our dog and/or kids kept knocking them over. No more now!

Hope you had fun with these random bits and pieces. If you get a chance, swing on over to the Theme Thursday site and check out what the other bloggers have in store for this theme!
Posted by Wings1295 at 12:02 AM